Time is no longer money

Since the dawn of time, capital has been rewarded in connection with the passage of time and induced uncertainty. In the capitalist system, it translated into a simple equation: the longer the period, the higher the ¨price of money¨ i.e. the interest rate / income. This was the past. 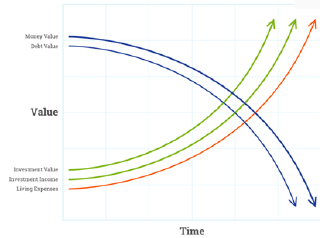 In our current (upside down?) world, lots of debt are issued with negative interest rates. This definitely contradicts this bedrock principle: time actually erodes the value of capital / money… This is just a by-product of the financial repression, implemented by developed-countries’ central banks since about a decade.

But, recently, the Swedish Riskbank decided to exit negative interest rates because it considers that the merits of abnormally low rates are – definitely – undermined by the negative side effects. Indeed, a large portion of the society, namely retirees and ¨not haves¨ are suffering from it, not to mention pension funds and traditional savings’ banks. Major developed world’s central banks are also attempting to redesign their objectives and means of actions, in order to exfiltrate from the world of negative rates. Actually, the Fed and the ECB are reviewing their bedrock principles / objectives. With the same afterthoughts, populist politicians contemplate Modern Monetary Theory.

The current dislocation of capital markets spells an unstable equilibrium

Sooner or later, uncertainty and time will regain their value / price

In desperate pursuit of Time

¨Survival – the pursuit of time – is the most basic instinct… Making most of your time is survival instinct coupled with capitalism. ¨

Our modern societies demand instant action and reaction. 21st century people want to do more (and more) things at the same (or less) time. Some well-known US ¨Tech¨ juggernauts have managed to create two things for their ¨customers¨: extend and/or enhance time. Indeed, softwares and i-products save time by offering faster processing and transactions. Home delivery – for basic goods and grocery – prevent from losing time in stores’ lines. Streaming companies allow to avoid losing time on ads, etc., etc.

A few companies managed to take advantage of it and thrive

The ECB is expected to run its first 2020 monetary policy meeting on January 23rd. There is a widespread assumption that the ECB has reached its monetary policy limits, and that the best will be fiscal stimulus. This is not the case. Low/negative interest rates were expected to boost spending through lower mortgage interests, wealth effect and easier funding conditions. But they have mainly reduced savers ’ incomes and bank profitability. Ahead of the ECB strategic review, it still has some tools available. She can use dual interest rates i.e. targeting different interest rates for loans and deposits. Such loans can also be restricted to specific sectors like renewable energies. This would be more effective than QE, forward guidance or NIRP. It would provide a powerful monetary stimulus and could be used to support the Green New Deal.

What will happen if the central bank raises rates on deposits, and cut them on loans? Both savers and borrowers will benefit from it. History shows that such an approach always raise demand. The strongest recent example is China in the 1990s. Interest rates on deposits and loans were set independently. When stimulus was required, rates on loans were reduced by more than on deposits. This is still the case.

For some time now the ECB has acted independently on lending rates. Its targeted longer-term refinancing operation (TLTRO) allows the central bank to lend to commercial banks at negative interest rates, if they extend new loans to the private sector. TLTROs also exclude lending to unproductive parts of the economy like mortgages.

Draghi latest innovation was to introduce tiering system, allowing the ECB to set the rate of interest on the deposits that banks hold with the central bank independently of the main refi rate. The ECB reduced the rate at which banks can fund lending to the economy and raised the average rate that banks receive on their deposits. This is already a partial dual rates policy.

If the ECB wishes to stimulate the economy, it could increase the TLTROs maturity, reduce further interest rate or increase the interest rate on deposits through tiering. Some amendments could be done on the TLTRO, as currently the only requirement to access the program is that banks use it to extend new loans. Lagarde expressed a desire to make ECB policy consistent with the eurozone policy on climate change. So, TLTROs at negative rates should be available to banks that are financing sustainable energy investments. The latest 3-year TLTROs at -0.5% have only a marginal impact on available funding. But a 5 or 10-year loan at -1% or -2% would be a game-changer.

Share price rose above $ 300 last week following iPhone 11’s sales in China at +18.7% in units, while total smartphones sales in China fell 13.7% in December. This figure shows an acceleration compared to previous months. The iPhone 11 has shown noticeable improve-ments with the battery life and camera, which has been upgraded, and the entry-level price has been lowered. The reception of the iPhone 11 has been great and investors expect sales to rise sharply for the Chinese New Year, on January 25th.

Apple is expecting very high demand for its 5G iPhone. Some analysts speak of a 5G Super Cycle for Apple, with volume growth of at least 10% in 2020. According to a specialist, 350 million out of 900 million iPhones in circulation around the world could change to an iPhone 5G. Apple will launch the iPhone 5G in September 2020.

Apple generates revenues of $260 billion. With the only Airpods product (wireless headsets), Apple is bigger than many companies like Adobe, Nvidia, AMD. 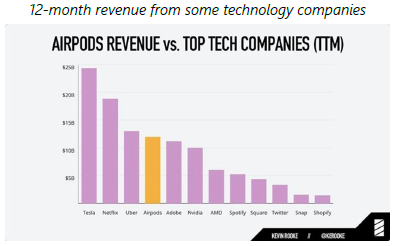 This enthusiasm for Apple has had a positive impact on its suppliers, including Qualcomm (one of the biggest winners in 5G), AMS, Infineon, STMicroelectronics and Dialog Semiconductor. All these companies, including Apple, also benefited from a serie of positive recommen-dations on the technology sector, in particular semicon-ductors. Apple, which launched its Apple TV+ streaming TV last November, was supported by the successful launch of Disney+.

Among Apple’s suppliers, we appreciate the Austrian AMS, listed in Switzerland, which has just acquired Osram for its skills in sensors, captors and photonics (generation, transmission, processing or conversion of optical signals), at the dawn of the expansion of connected things with the 5G coming. This acquisition increases debt, which remains manageable.

This document is solely for your information and under no circumstances is it to be used or considered as an offer, or a solicitation of an offer, to buy or sell any investment or other specific product. All information and opinions contained herein has been compiled from sources believed to be reliable and in good faith, but no representation or warranty, express or implied, is made as to their accuracy or completeness. The analysis contained herein is based on numerous assumptions and different assumptions could result in materially different results. Past performance of an investment is no guarantee for its future performance. This document is provided solely for the information of professional investors who are expected to make their own investment decisions without undue reliance on its contents. This document may not be reproduced, distributed or published without prior authority of PLEION SA.