Paul Volcker died last December, in his nineties. He is unanimously consid-ered as one the – if not the – greatest central bankers of all times. He has been famous for defeating the unbridle inflation of the 70’s and 80’s in the US.

By nature, he was more a conservative / Republican type of civil servant, who strongly advocated for monetary orthodoxy. So, it came as a surprise when he was appointed in 1979 by J. Carter – not exactly a right-wing politician – as head of the Federal Reserve. This brilliant appointment made wonders but is barely credited to the courageous Democrat President. Despite a very politically turbulent period Paul Volcker stood still and relentlessly rose interest rates (Fed funds ranged between 10% and 17,5% during several years). At that time, inflation had become entrenched, essentially because of excess demand and spiraling wages in the context of an oil shock (embargo). US CPI exceeded 10% for years between the late 70’s and the early 80’s. From the mid 80’s, it definitely collapsed below 5%. 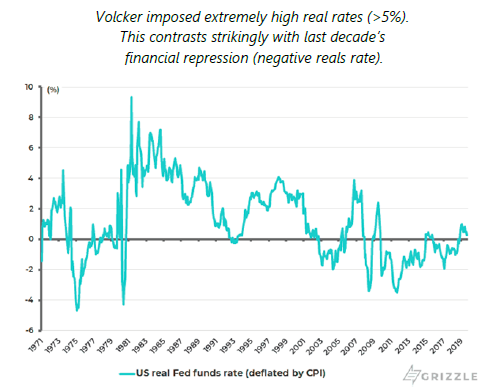 Up to 1987, Paul Volcker magnified and symbolized the independence of the central bank. Indeed, he didn’t do well – at all – with the following profligate Reagan administration. He was replaced by the more pragmatic and docile Greenspan. Paul Volcker has also always been very dubious on financial innovation and highly critical about the relentless temptation of bankers for excess leverage. Despite his (very) old age, he has been active in the last decade, by helping the US administration addressing the consequences of the Great Financial Crisis (2007/8) and revising financial / banking regulations. He set up the controversial Volcker rule, which by essence limits the risky – proprietary trading operations – of banks to a decent and reasonable level, in order to reduce speculation and risks in the financial system.

Paul Volcker was a visionary central banker, a man of conviction

What is the Volcker’s legacy?

The global economic landscape is very different since a decade. We now live in a world of over-supply, deficient demand and embedded disinflation. Potential growth has become structurally lower. Population is aging in many countries. For instance, working age population is going to shrink by 0,4% in EU 17 in the next decade. This is also a serious source of concern in China.

The bargaining power of the labor force has collapsed and, therefore, wages are no longer a source of concern (courtesy of automation and globalization). The risk of oil inflation shocks due to scarcity vanished with the shale revolution and transition to clean – non-fossil – energy.

US banks are in good shape. All clear on the horizon!? The Volcker Rule is under bi-partisan siege, considered – by complacent politicians – as too binding / ¨emasculating¨ for banks. It will be gradually dismantled, particularly if Trump wins next November.

Fixed income. The outbreak of coronavirus is worrisome

Would a slow-down in one part of the world infect growth in other countries or sectors. The history with the SARS outbreak is the one that comes to mind. It did lead to a spike in illness, quarantines, and a visible bite out of GDP in the peak months. SARS was a relatively rare disease. At the end of the epidemic in June 2003, the incidence was 8422 cases with a case-fatality rate of 10%. Over this period between November 2002 and June 2003, the US 10-year yield fluctuated between 4.25% and 3.50% most of the time. For the time being, the Wuhan coronavirus does not seem to have the same mortality rate.

The other episode that comes in mind is the Asian bird flu (H1N1) in summer 2009. It never delivered the global economic impact that some were forecasting at the time. It is very tricky to assess the flu impact on financial markets as it happened just after the financial crisis. However, over the short-term, this episode coincided with a 50bps decline in the US 10-year Treasury to 3.25% after having rebounded over the first 6 months of the year from 2.0% to 4.0%.

While in emerging economies, the growth is expected to pick up from 3.7% in 2019 to 4.4% in 2020 and 4.6% in 2021. IMF forecasts have been revised down for all years, the biggest negative contributor should be India while China’s growth has been revised upward. 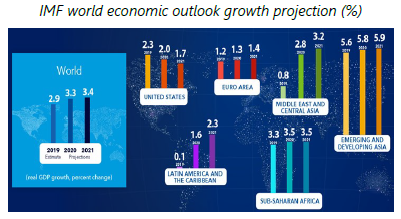 Emerging economies now account for more than half of the world GDP. They are posting higher growth, while their indebtedness is significantly lower than the developed economies at 53% vs. 103%. This positive trend on the macroeconomic front looks set to be maintained, creating a fertile environment for corporate bonds. Furthermore, EM issuers are an important part of the fixed income universe.

Usually EM investments result in higher risks such as political, economic, credit, currency or market liquidity. But with better fundamentals, EM exhibits a positive rating trend for years which should remain intact. As they have already experienced various crisis, several countries have implemented key reforms to strengthen their systems going forward.

The fundamental factors provide the essential bedrock for corporate bonds. Government rating also benefit from fundamentally strong companies that are strategi-cally relevant and close to the state. According to rating agencies methodologies, corporates cannot generally have a higher rating than their respective sovereigns, even if there are some exceptions when their headquar-ter is in a higher-rated developed country than their own market.

As a result, investors can benefit from the higher EM corporate spreads with strong fundamentals. The diversification in the number of issuers, sectors and maturities has increased in recent years. 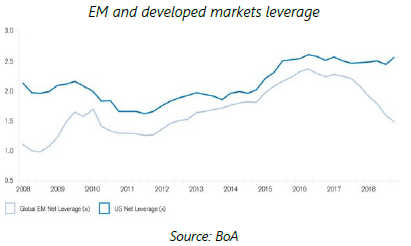 Looking at their fundamentals, EM corporates have an average leverage of 1.5x (net debt to Ebitda), while US peers are at 2.6x. A comparison within the individual rating segments reveals that EM corporate bonds exhibit better ratios across all buckets. Furthermore, EM corporate bond issuers have steadily deleveraged their balance sheets since the last energy crisis in 2015/2016. 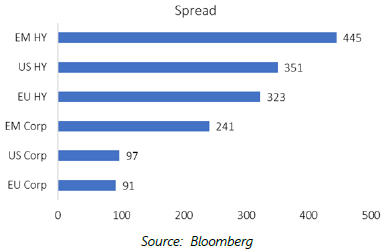 EM corporate bonds offer a yield to maturity of 3.9%, while the spread is 240bps, with a duration at 4.8 and a BBB average rating. Valuations also look appealing in relative terms. EM spreads, both investment-grade and high-yield, offer a solid pickup versus their respective developed peers. This is likely to be of even greater interest as the average developed markets duration is higher.

Investor sentiment indicators have been in areas of extreme optimism for some time, and US indices have been overbought. We wished a consolidation to ease the growing momentum of complacency. We were waiting for a negative trigger, like macro, corporate results, Trump, Iran, debt, US budget deficit, but it came from China with an extreme speed: the coronavirus. The quarantine of several Chinese cities will have an impact on tourism and business activity, accentuated by the New year holiday season. The region where Wuhan is located accounts for 9% of national vehicle production. Several western firms are worried like Rémy Cointreau, McDonalds, Disney, Starbucks or airlines companies. 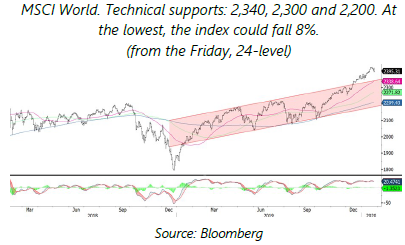 Equities. Still some time for Netflix

Netflix has released higher than expected results and international new subscribers, but guidance remains cautious with the threat of new competitors. Disney+ and Apple TV+ were launched in November 2019. HBO Max (AT&T) will start in May 2020 and Peacock (Comcast) in July 2020. Other good news: negative free cash flow should decrease in 2020 to $2.5billion, after a peak at $3.3billion in 2019, coming from higher profits and not a content investment decrease. 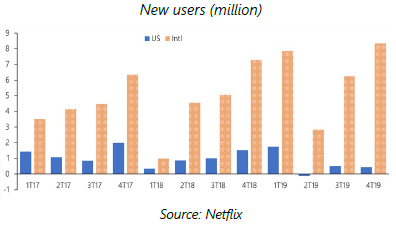 The arrival of Disney+ and, to a lesser extent, of Apple TV+ affected the growth of new subscribers in the US: Netflix never experienced a so weak growth. The launch of Disney+ was a big success. However, the US market is mature, and this trend is logical.

To justify its huge spending budget in content production, the number of subscribers will have to rise at a sustained pace out of the US where Netflix enjoys limited competi-tion, but Disney+ has decided to speed up its entry into the international markets; it will arrive in March on the Old Continent. Competition will become global, but not immediately. Then there is a risk of a price war. Netflix could imagine other sources of revenue, such as digital advertising (denied by the CEO), but it would clash with other giants like Google, Facebook and Amazon, or video games.

Equities. Sales increase of electronic devices (PCs, tablets and smartphones) in 2020 thanks to 5G

Research company Gartner forecasts a 0.9% sales increase in electronic devices in 2020 thanks to 5G. This increase will come mainly from the replacement of 4G smartphones for the 5G standard. 5G smartphone models will account for 12% of sales in 2020, 43% in 2022 and more than 50% in 2023. 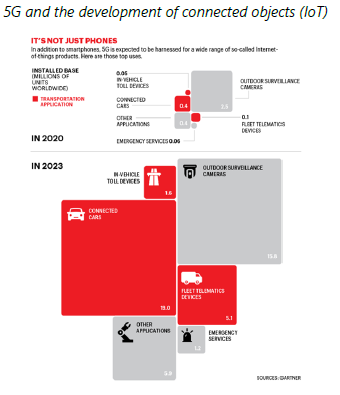 Disclaimer
This document is solely for your information and under no circumstances is it to be used or considered as an offer, or a solicitation of an offer, to buy or sell any investment or other specific product. All information and opinions contained herein has been compiled from sources believed to be reliable and in good faith, but no representation or warranty, express or implied, is made as to their accuracy or completeness. The analysis contained herein is based on numerous assumptions and different assumptions could result in materially different results. Past performance of an investment is no guarantee for its future performance. This document is provided solely for the information of professional investors who are expected to make their own investment decisions without undue reliance on its contents. This document may not be reproduced, distributed or published without prior authority of Pleion SA.